Lucy teaches the yoga philosophy module on all of our yoga teacher training courses and has a wealth of knowledge to share. Having started practicing yoga as a (very unhappy) teen in the Highlands of Scotland, Lucy trained with the YTTC (Yoga Therapy and Training Centre) in County Down in 2000-2002. She has done extensive further training, including with Donna Fahri, Christophe Mouze, and Julie Gudmestad, and is currently affiliated to YTI  (Yoga Therapy Ireland). She is also a writer and philosopher and has published work on ideas that changed the course of history, and on what it is to do good. She completed her PhD in Philosophy between 2010 and 2014 in NUIG, Galway and later in UCC, Cork.

She spent a number of years working as a volunteer (VSO) in Sudan, Indonesia and Kenya, followed by 17 years in Erris, in the far west of Mayo. She teaches yoga and yoga philosophy on our 200 Hour Teacher Training programme and is Mother of two teens. As a marathon runner, Lucy recognises herself as having taken an endurance, tough-love approach to most things. She is now focused, above all, on compassion and the ecological emergency. Her book is titled Love is Green. 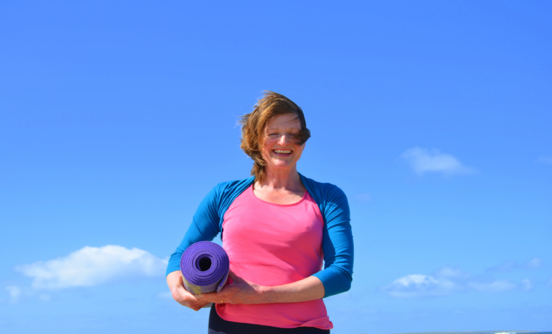