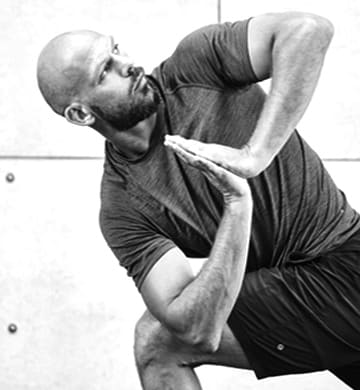 On the training Doug covers Inversion practice (headstands, handstands, forearm stands) and Meditation & Mindfulness. Doug has been a stuntman for 7 years and been in an extensive list of Hollywood productions including, Star Wars, James Bond, Mission Impossible, The Kingsman 2 and The Avengers. He’s also doubled Channing Tatum, Colin Firth, Luke Evans and Tom Hiddleston to name a few. This work took its toll after a while and his training methods had to adapt to ensure his longevity in this field. He began going to yoga and loved it immediately, recognising its healing properties and its calming influence in a world full of adrenaline.

After practicing for several years he decided to do his teacher training to get a deeper knowledge of the discipline. He incoporated his unique background in martial arts and gymnastics into his yoga and so formed a fresh new approach he terms ‘Warrior Yoga”. A mixture of martial arts katas from Mauy Thai, Wushu, Jui Jitsu and Boxing, gymnastics conditioning and traditional Yoga poses. Expect to move in new ways that will challenge your body and mind while focusing on the breathe. Mastering both traditional yoga poses and martial arts strikes and accessing your inner warrior.